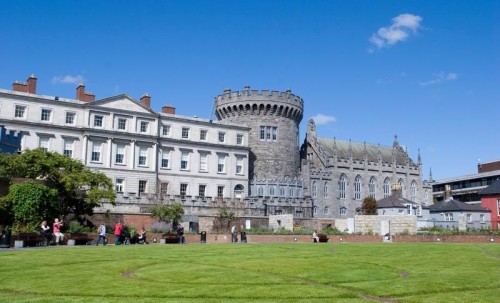 As one of Europe’s top tourist destinations, Dublin has something for everyone. From a world-renowned nightlife to iconic sights such as the Guinness brewery, the city is teeming with character, culture, and quintessential Irish charm. Whether you’re visiting Dublin for just a short weekend break or an extended getaway, make sure to visit some of its most famous sights for a classic Dublin city experience.

Start off your tour of Dublin with a morning boat ride along the River Liffey. Measuring 120km in length, the river cuts the city in half and runs along some of its most famous sights. A guided tour will not only give you a chance to see some of these iconic attractions, but will provide you with intriguing facts about the history of Dublin City and the River Liffey from as far back as the arrival of the Vikings.

Next, head to Trinity College and Library, one of Dublin’s oldest sights. Founded in 1592 by Queen Elizabeth I on the grounds of an Augustinian priory, the college and its library are among the city’s most visited attractions. Trinity College Library also holds more than one million books and manuscripts, the most famous being the “Book of Kells”.

After taking in the history of Trinity College and the Library, walk down Grafton Street towards St Stephen’s Green park – a 27-acre Georgian square. Pick up a picnic lunch along the way, and enjoy it amid the serenity of the park’s greenery and lakes. Afterwards, stroll along its winding paths, or take a breather on one of its strategically placed benches.

Grafton Street is one of the city’s premier shopping districts, and a must-see for anyone visiting the city. Trendy high street shops and chic department stores will please window shopper and true retail enthusiasts alike, while the district’s many bars and cafes are perfect for an afternoon tea or coffee. One of the city’s most famed cafes – Bewley’s – happens to be situated here, hosting one million customers each year.

Of course, no visit to Dublin is complete without a visit to the Guinness Storehouse. Situated at the historic St James’s Gate (Dublin 8), the storehouse and its exhibitions will tell you everything you need to know about the city’s (and country’s) beverage of choice – from its brewing process to the global Guinness transportation system. The highlight of the tour is a “free” pint in the Gravity Bar, situated high above the storehouse and offering stunning views of Dublin.

After you’ve had your fill of Guinness, head to St Patrick’s Cathedral, followed by the nearby Dublin Castle. Founded in 1191 by Archbishop Comyn, St Patrick’s Cathedral is Ireland’s largest church and the National Cathedral, as well as the final resting place of Dean Swift (of Gulliver fame). The castle, on the other hand, is today used as a government office. It offers a tour, which takes visitors underground to the moat and the most ancient parts of the castle, as well as impart 800 years of Irish history relating to the castle.

Finally, don’t leave Dublin without a stop in the city’s Temple Bar district – the city’s “bohemian quarter”. Home to a string of restaurants, bars, shops and pubs, Temple Bar is one of the city’s liveliest spots to enjoy the craic. You’re also bound to see many street artists performing, as well as a farmer’s market if you happen to stop by on a Saturday. If you’re particularly interested in Dublin’s pub culture, you might want to consider taking a musical pub tour, which also departs from Temple Bar.

With so much to see and do in Dublin, you’re sure to enjoy a fun-filled city break– whether you’re planning a weekend break or an extended stay. Just remember to book one of the hotels in Dublin ahead of time – particularly during high travel seasons, as they can book up quickly.