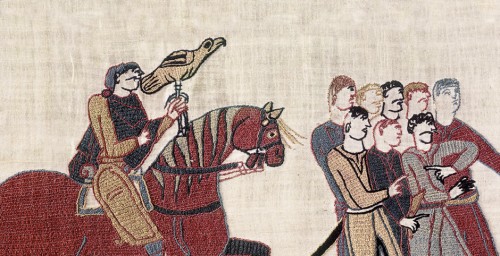 The Bayeux Tapestry is without doubt one of the most unique and valuable pieces of art and historical commentary in the world. Housed in the Bayeux Museum in Bayeux, Normandy, France the 70 meter long embroidered cloth produced in the ‘Norman Romanesque’ style provides an insight into the historical events that culminated in the Norman invasion of England and finally the Battle of Hastings in 1066.

From left to right the tapestry takes the viewer on a journey starting with Harold’s trip and arrival in Normandy, his meeting with William the Conqueror, his travels in Brittany and his history making oath taken over the relics at Bayeux.

The tapestry continues to portray his return to England and his subsequent coronation. In the final scenes the Bayeux Tapestry shows the lead up to and final confrontation at the Battle of Hastings.

Why is this embroidered tapestry such an important historical relic?

Firstly its state of preservation is incredible. The colors remain extremely vibrant and the way in which it tells the story depicted across its length is as captivating for modern audiences as it must have been when it was first unveiled in the 1070’s. The longevity of this piece of art is remarkable.

The fifty scenes pictured on the tapestry are complete with Latin commentary and are amazingly clear. The fact that the characters and settings are the only embroidered parts of the tapestry make the events extremely clear.

The tapestry contains its fair share of mystery – not least of which is the depiction of the death of Harold II of England who is pictured with an arrow appearing to pierce his eye. Research has shown that the arrow was a later addition added during a period of repair to the tapestry – although from the needle marks around the arrow the figure is supposed to have been holding something – probably a spear. It is not known whether Harold actually died from an arrow to the eye so this remains one of the questions surrounding the tapestry.

There also appears to be a priest or monk striking a woman in the tapestry with a Latin inscription that no one has been able to translate satisfactorily. There also appear to be at least two final panels missing from the tapestry – which would further have extended it’s already impressive length.

For those with an interest in both art and history a visit to the Bayeux Museum to view the tapestry is highly recommended.