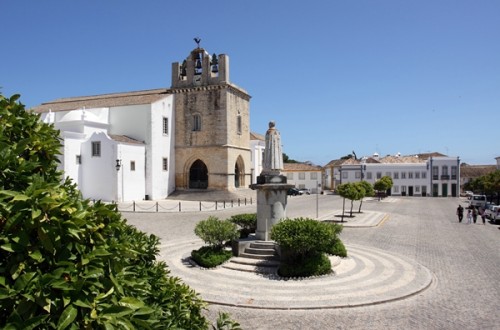 Capital of Portugal’s popular Algarve region, Faro is the southernmost city in the country and though we typically associate The Algarve as being one rife with tourism, flights to Faro will land you in an altogether calmer holiday experience. And though when the sun goes down there is still plenty of fun to be had, you’ll find Faro gives a much truer Portuguese experience than its busier neighbours.

Held within a circle of medieval walls, the Old Town area is where site-seers to the city will naturally gravitate, and taking pride-of-place in the Old Town is Faro’s 13th Century Cathedral. Displaying a mixture of Baroque, Gothic and Renaissance styles in its design, the cathedral has a truly magnificent interior as well as an important collection of historical relics.

For those seeking something a little more interesting though, seek out The Chapel of Bones. Located alongside the Igreja do Carmo, the bones of over 1000 monks have been carefully arranged across the chapels and stand as a stark reminder of mortality.

Of the museums in Faro it is the Municipal Museum that will most impress. Sat behind the cathedral and housed in a former convent, it features pre-historic, Roman and medieval artefacts and displays, and thanks to a recent appraisal can now boast Gauguin amongst their works of art. The large statue of King Afonso III outside the museum will make it easy to spot.

The Maritime Museum based in Faro Marina is also well worth visiting for further information on Portugal’s seafaring history, covering not only the local fishing trade and abundant sea-life but art and cultural discoveries made in nearby waters.

And though not much remains of the 9th Century castle of Faro, what is left of its defensive walls and towers provide insight into the city’s history, and tracking the remains around the city is one of the more popular attractions for tourists on the culture trail.

1 thought on “Holidays in Faro”