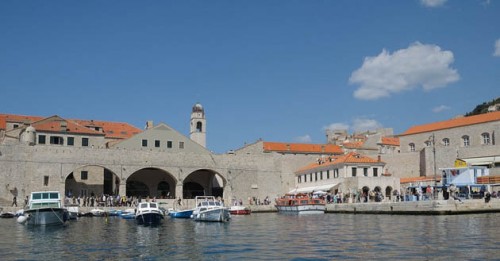 The Old City of Dubrovnik in Croatia is an incredibly well preserved bastion in entire Europe. On entering the city, one immediately feels as if transported to the Renaissance era. The city boundaries are girded by two kilometers of fortified walls.

The sea surrounds three sides of the city. The narrow streets and the elegant squares of the city of Dubrovnik simply feel right out of a movie set, and all together the city feels too perfect to be real. There are streets as narrow as 1 m.

The architecture here is a blend of Baroque, Gothic and Renaissance, almost like Venice minus the canal system. All of the structures are built in limestone, which has been given a gleaming gold finish by the centuries under the sun.

The only downside to a location so beautiful is that it is so popular, and the crowds can get a bit more sometimes. The city has no cars, no modern buildings. In fact, there have been no new buildings built in the city since the 18th century. The city was shelled in 1991, but the damage has been repaired.

The islet of Lokrum is a really beautiful location, which can be accessed in about ten minutes by boat from the Old Harbor. This is a lush green location, filled with some historical remains, including, a Napoleonic Fort, a Habsburg summer retreat, a ruined Benedictine monastery and more. In addition to all this, there is a tiny tidal pool here that is the smallest water body that has been classified officially as a sea.

The Stradun is the main street of Old Dubrovnik, and has palaces lining both its sides. The road goes from west to east in the city. There are a number of charms, and make sure you taste some Croatian sladoled ice-cream.