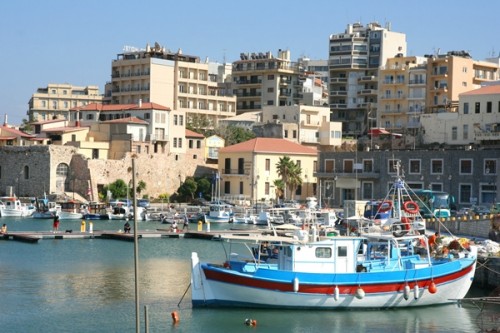 Hop Around the Greek Islands for Sun and Adventure

When you think of Greece images of white-sand beaches, blue onion-domed buildings and the azure sea come to mind. Truly, heading to Greece is a sun-soaked adventure that is also steeped in history and culture. Greece is an island nation, with over 6000 islets and islands comprising much of the country. One way of seeing much of the country is by island hopping. A system of ferries connects most of the islands, giving travellers an independent way of getting around.

It’s possible to island hop starting out in many different locations in Greece. Athens, the largest and capitol city is a logical jumping off point. Athens has several ferry ports of call that include the Port of Piraeus, Port of Rafina, and the Port of Lavrio. If you are traveling with a few other people or lots of baggage it is always best to get to the ferry ports at least an hour before sailing to make sure you don’t miss the boat. Several large ferries out of Athens are overnight ferries that head down into the southern islands. These ferries offer stateroom cabins, a galley and bench seating for those in the third class steerage. Most of the ferry systems in Greece accept major credit cards.

One fun thing to do when island hopping around Greece is to play “ferry roulette.” Simply show up at the nearest ferry port, see where and when the next sailing heads out, book passage and roll the dice for adventure. Indeed, this gets you into the heart of the Greek Islands, and often results in finding yourself off the traditional tourist islands.

Guidebooks are great, but all too often become a “crutch”. Have some fun, and head out for places unknown. Greece is a peaceful country and almost all of the citizens are eager to welcome foreigners on vacation. Ask a Greek to tell stories about their country and you have a friend for life.

On some of the Greek Islands are old remnants of the English Crusades. In the Southern Dodecadese Islands, you can hike along old fortified walls that were built to house English soldiers and repel invading forces. The island of Kalymnos in the Dodecadese has such forts and also the city of Pathos, considered the “sponge diving capitol of the world.”

When you are on the islands, consider renting a car or a Vespa. These are readily available and easily rented. Because gas is expensive in Greece they offer an economical method of covering lots of ground while you explore. Add in the fact you are outside in the Greek sun and you have a recipe for sun-soaked exploration.

Greece is also home to wonderful cuisine. Hop around the islands and you will find an assortment of regional dishes and specialties. Small salted fish, rich and flaky pastries and cold cucumber soups are some of the items to look for as well as the ubiquitous baclava, gyro and ouzo. Become a gastronomic “Indiana Jones” and sample each of the local flavours as your head around the islands. There are ten cuisine regions in the country, from Corfu to Crete.

Greek Island hopping is possible out of Athens or even from the Turkish Coast. Be aware that if you are an American entering Turkey from Greece you may be asked for an additional Visa entrance fee.

Hop Around the Greek Islands for Sun and Adventure
Greece – A Honeymoon Destination for Lovers of Beaches and Culture
Things To Do in Corfu, Greece
Find Cheap Apartments in Halkidki
Five top activities to do on the Greek Islands
Top Greek Attractions
A Greek Island Cruise
Off The Beaten Path in Greece