Vatican City is a small country within the city of Rome, Italy. Inside its walls are St. Peter’s Basilica, Vatican City Museum, and the Sistine Chapel by Michelangelo.

Vatican City’s official name is the State of Vatican City, or Stato della Città del Vaticano, and is the world’s smallest independent country. It has its own postal service and banking system and some of the greatest artistic masterpieces exist within its city walls. It is a UNESCO World Heritage site and well worth a visit while traveling in Rome.

The head of government in Vatican City is the Pope who is an elected official. The Pope is the sovereign of the State of Vatican City, and is the only absolute monarch in Europe. He is also the leader of the Roman Catholic Church.

There are three main attractions in Vatican City: St. Peter’s Basilica, The Vatican Museums, and St. Peter’s Square. The Vatican gardens take up half of the city and are also are treat to see while walking through this country that consists of 110 acres.

St. Peter’s Basilica is the largest Christian church and can seat over 60,000 people. The Basilica’s dome can be seen in many places throughout the city of Rome. The Catholic tradition follows that St. Peter, one of Jesus’ twelve apostles, is buried underneath St. Peter’s alter. There are tombs of several popes and saints that can be seen under the main floor of the basilica. There is also valuable artwork throughout St. Peter’s, including the sculpture of La Pietà, completed by Michelangelo. 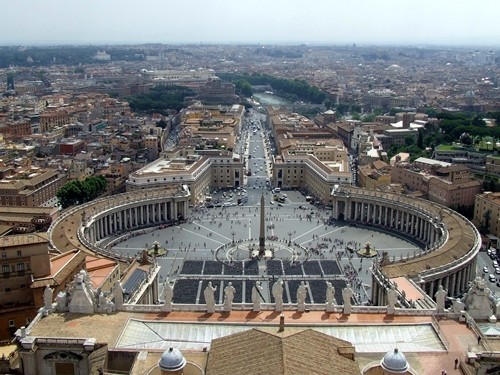 The famous, Sistine Chapel, is part of the Vatican Museums and was completed by Michelangelo in 1512. It is also where the papal conclave is held, a meeting where the Pope is chosen. Other museums include:

St. Peter’s square takes up a large part of Vatican City. In the center of the square is an obelisk that is 84 feet (25.5 m) tall and dates back to the 13th-century. It is in St.Peter’s square that the Pope holds a general audience every Wednesday morning and where Sunday mass is held at noon. Christmas and Easter mass is also held in St. Peter’s square and can draw quite a large crowd. Tickets are free for all these events, but reservations are required for the General Audience and in the winter when the services are held inside in the Paul VI Hall.

Walking around Vatican City, visitors can spot the Swiss guard, who are wearing colorful blue, red, and yellow Renaissance style uniforms. They are part of the security in Vatican City and are usually standing outside St. Peter’s and the Vatican Museums.

Tours of Vatican City, including papal audience, can be found at Vatican City Tours. If already in Rome, many tours in Rome are sold on the street by tour operators. Many of these are legitimate tours and there are plenty to chose from. Find out who is reputable and is offering visits to all of the sites in the city.

Previous Post: Dining in Monaco on the French Riviera
Next Post: Las Fallas de Valencia: The Excitement of Beauty Wit and Fire