Think of it as perhaps the world’s biggest block party filled with music, sculpture, food, fire and fireworks. For three days in March Valencia explodes.

Way back in the dim days of medieval Valencia the many carpenters and furniture makers of the city celebrated the coming of spring by cleaning out the sawdust, wood chips and scrap from their workshops and having a communal bonfire in the neighborhood square. Valencians are a lively and naturally community-minded people and the event became an annual festival.

Immense Festival of Community and Neighborhood

Jump forward a few hundred years and Las Fallas has become a massive city-wide celebration of neighborhood pride and community. It is massive because it involves not only the approximately 900,000 people within the immediate boundaries of the city but also other communities within its administrative district of more than two million people.

A falla is at once the name for a traditional Valencian neighborhood and the name for the sculptures created by each of these neighborhoods for the celebration. Each falla, comprising usually a section of streets bound together by a sense of community, designs, plans and builds Falla sculptures on a theme of their own choosing, usually poking fun at themselves, their government or even international figures. In each falla the men and women (falleros and falleras) work together throughout the year to create their communal falla.

For anyone who has not been to Las Fallas it is hard to comprehend the magnitude of this celebration. The day before the official opening these neighborhood organizations are frantically assembling their fallas in 350 areas throughout the city, many of them massive in scope. Each Falla is made up of many figures (ninot), all actors in carrying out the falla’s theme. Originally made of scrap wood and paper maché, the ninot can be small, life sized or even heroic in stature.

These creations are often monumental in size and cartoon-like in character. Satire is an important tool for the falla designers and it sometimes has a very sharp bite. One falla recently portrayed a life-sized Vladimir Putin with a violin-playing puppet – Dmitry Medvedev, and another showed the swinging singer Silvio Berlusconi while nearby a tall Carla Bruni danced with a diminutive Nicolas Sarkozy.

But not all is satire — romance also plays a major role. Super hero sized fairy princesses meet bronzed super hero princes amidst billowing clouds and assembled crowds of ninots, some of which are engaged in activities that might best be called risqué in North America. Fantasy also plays a part, with richly robed characters in brilliant colors. Falla at each square are all different and come in all sizes. Usually there is one central community falla with tens of ninot and this falla can reach as high as 75 feet and nearly fill the square. Composed most often of a central themed character or two, in the air and on the ground around it are dozens of smaller figures engaged in all sorts of activities. In each square is also a smaller falla, this one inspired by and for children. Valencians take particular delight in their children and these special ninot are particularly enchanting. 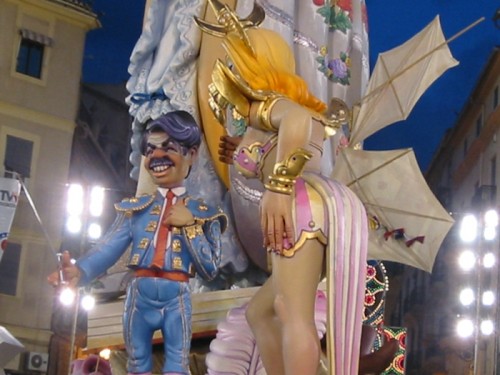 The statues are only part of Las Fallas. The religious aspect of the festival shows in the annual Procession of Ofrenda de Flores a la Virgen de los Desamparados (Abandoned Ones), a series of processions that begin at 4 PM every March 17 and 18. Tens of thousands of men, women and children process through the streets dressed in exquisite traditional costumes, following costumed bands playing traditional music (especially Valencia, which becomes ubiquitous). The costumes are incredible in their detail and each participant takes particular pride in their presentation. The processions, which last until the wee hours of the morning, terminate in the Plaza de la Virgen, near the cathedral, where the bouquets of red and white carnations each woman carries are fitted onto a towering framework. When filled with the flowers, this creates a statue of the Virgin more than 45 feet tall and dressed in a gown of flowers.

Mascleta, Fireworks You Can Feel

Throughout the entire period of Las Fallas the city is awash with fireworks which, especially from late afternoon and into the evening, are apt to burst almost anywhere. The most audacious of the fireworks are something that Valencianos seem to particularly enjoy, an event called Mascleta. These are extraordinary displays of sonic fireworks fired off in the heart of the city. Loud, smoke-filled and seemingly chaotic, the impact of sound is physical. They are the delight of the crowds. Look for mascleta in the neighborhoods, too, particularly Malvarosa, and for the biggest in the Plaza Ayuntamiento on the afternoon of the 19th. On the evening of March 18, the town celebrates with a massive fireworks display.

Finale of Fireworks and Fire

The grand finale of Las Fallas takes place on the last evening, the 19th of March with the ceremony called Crema, literally the cremation of all of the Falla throughout the city. Starting with a massive mascleta and fireworks display, the fallas in front of the City Hall are set ablaze, starting with the smaller children’s falla and ending with the burning of the huge central falla. No one will be alone at this event — hundreds of thousands of people fill the plaza and all the streets leading into it. Arrive early to get a good viewpoint.

Book Early If You Go

Las Fallas will take place March 15-19. The city is very full during the event so it is wise to reserve rooms as early as possible. Fly directly to Valencia or travel through Madrid and take the bullet train to Valencia. While there, don’t miss seeing architect Santiago Calatrava’s